This is part 2 of the story about the Best Thanksgiving 5K in Tennessee —right here in Sevierville ! If you missed part 1, it will be under this post or can be found in archives. This part will begin with a couple of the awards presentations and an adventure sport celebrity racing in our midst. First, here are the overall male and female award winners.

Brandon Mayo was the overall male winner with 17:25.31 time. 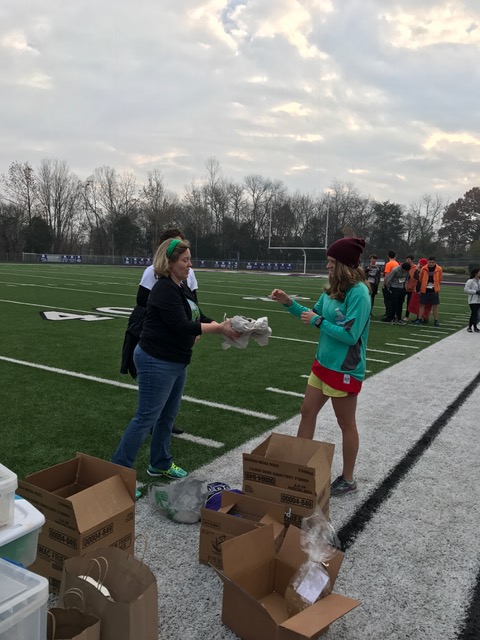 There were many winners in the various age groups. Awards went to the top three in each category so you definitely have a shot in your age group.

My friend Kristi won first in her group! Proud of her!

My friend Kariss Waite won first place in her group too.

Then I won first place in my event! Even set a new personal record, two minutes faster than any race before. I can’t wait to run next year!

There were so many more winners that I couldn’t keep up with them and didn’t have my notebook to write down names, but you can look yourself by taking this link to the SCHS Foundation Facebook page.

Here is a link to the Facebook page for the SCHS Foundation 5 K.

As if the race wasn’t enough, there were a lot of cool door prizes. I won the second one, a rafting / zip lining adventure basket. Can’t wait for spring!

Now here comes the next surprise…

I ran into Joel Brannon on the way out of the stadium. We chatted a second, then Joel mentioned that there was a rather famous Spartan racer who had been with us in the race. I asked where he was and found him nearby. Here is the scoop…

This is Jamie McCart from Cincinnati, Ohio. He came to town to spend the holiday with his mother and sister who live here in the county. He also wanted to race in the 5K to keep in training. Interestingly, they couldn’t find the high school and almost were too late to be in the race. Fortunately, they arrived in time, but he said that he had no time to warm up. He literally walked from the car to the starting line then took off with the starting gun. What a story!    I just checked the stats and saw that he won his age group, 31-35, with a time of 18:21.35. 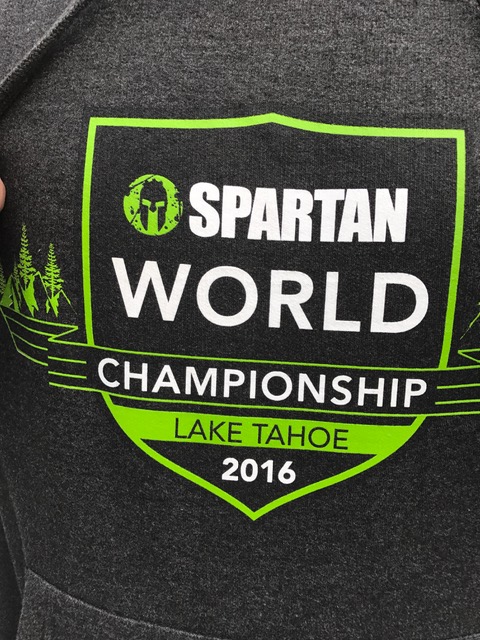 Jamie McCart says that he runs 5Ks to stay in shape and limber because he usually likes to compete in 10 miles or more. In fact, he said that he is preparing for a 200 mile race with a team. Each leg is virtually equivalent to a marathon. McCart is in the Hall of Fame at his high school for cross country and track. No doubt!

It should be noted that one of the special things Jamie McCart mentioned about the Smoky Bear Turkey Chase is that it starts and begins on a track. That makes it special because I can’t think of any 5K race that has that asset. I heard McCart ask his mother if that brought back memories of his high school days and she said yes. Lots of good memories. It is a great way to start and end a race! And what a nice track it is!

Jamie McCart pictured in the middle. His mother is on the left and his sister on the right. He is planning to move to Sevier County soon. What fun to have them here! If you are a male from 31-35 years old, your competition in races just got a lot tougher!

To see more about this adventure sport celebrity, just Google his name. Make sure you use a term like ‘Spartan’ or ‘Spartan racer’ so you don’t get the Scottish soccer player instead.

Here are some races and times for McCart.

Here are some pictures of a Battle Frog race and McCart is listed as an elite racer.

And there is a lot more.

What a great way to get out and about in Sevierville on Thanksgiving morning. I’ll be there every year they have it from now on. Go run!

One thought on “Part 2: The Best Thanksgiving 5 K in Tennessee. The Smoky Bear Turkey Chase 2016.”