Reunions are common this time of year, but the one that took place on May 20th was an epic event. The Sevier County High School Choir performed a Celebration Concert with alumni that harkened back 25 years. Two choral directors, teachers, students, and family joined together for an amazing musical moment. I wouldn’t have missed this for the world! 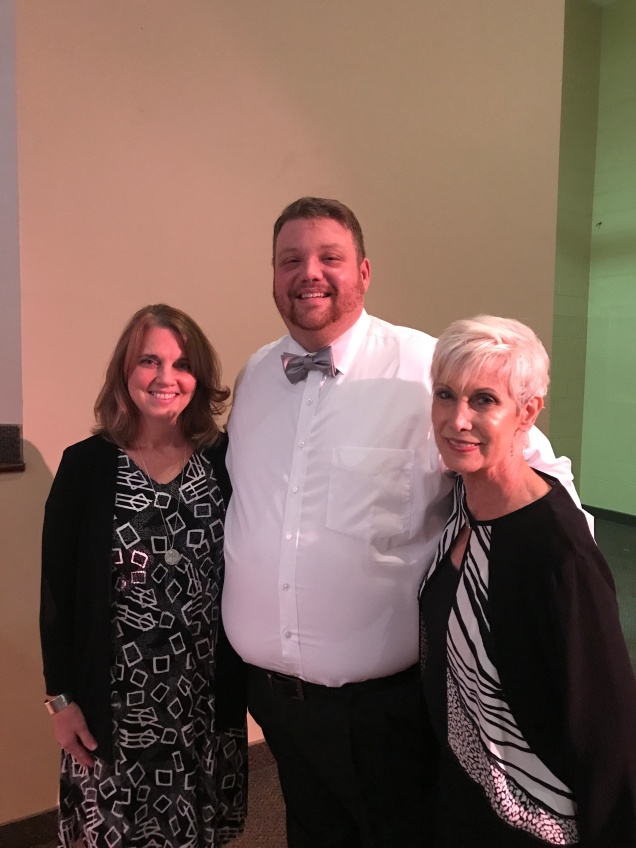 The SCHS Celebration Concert was led by three teachers. Mistress of Ceremonies was Ms. Jean Burkhart, director of the Seymour High School Choir (pictured left). The concert was directed by Nathan Rhea (center) and Peg Brasfield Welch (pictured right). Nathan is an SCHS graduate from the Class of 2000 and current director of the SCHS Choir. Peg Brasfield Welch served as SCHS Choral Director from 1991-2009 and was Nathan’s teacher at SCHS.

I walked in just in time to get a good seat in the performance hall of the Parkway Church of God. Since there were a few minutes before showtime, I got up to say hello to some very special people. 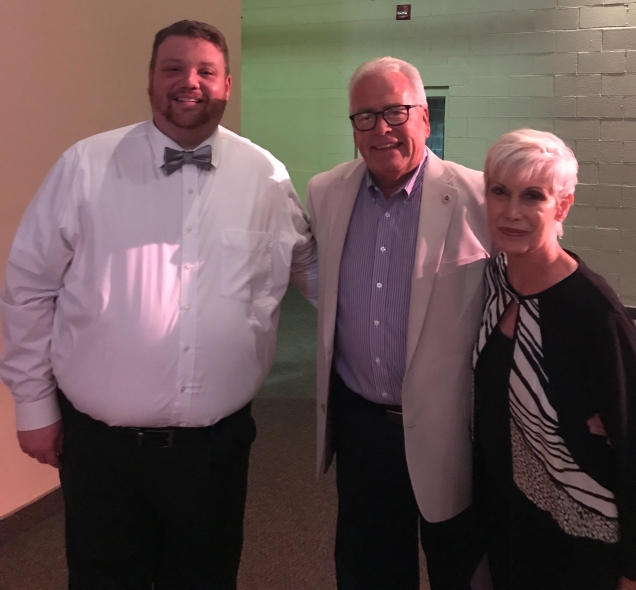 It is always so nice to see retired SCHS Principal, Gary Roach. He and his wife had arrived from Florida in time to see this event. Pictured left to right: Nathan Rhea, Gary Roach, and Peg Brasfield Welch.

Ryah Parkhurst and Deborah Webb waiting for the performance to begin. Deborah is a Fine Arts teacher and has known the two choir directors for many years.

The ‘Welcome’ and Opening Prayer were delivered by Mr. Roach. He is always interesting to listen to and we know that there will be a good story in the mix. Not only did he serve as our principal at SCHS, but Mr. Roach and Peg have known each other since she was in high school. 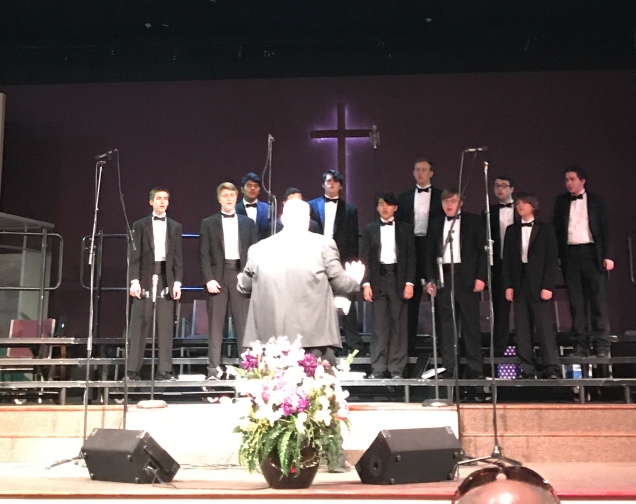 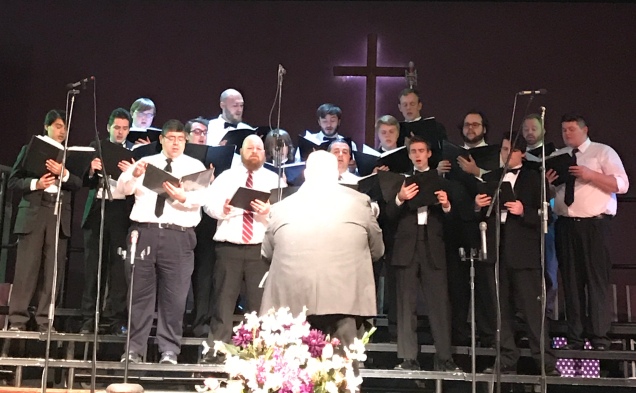 Next, the Alumni Men joined to sing “My Wild Irish Rose.”

Peg Brasfield Welch directed the Women and Alumni Concert Choir in “Music Down in My Soul.”

There were more songs to come. The audience truly enjoyed all the groups performing together. I had never heard “Nella Fantasia” before and thought it may the loveliest song that I have ever heard. Soaring vocals! 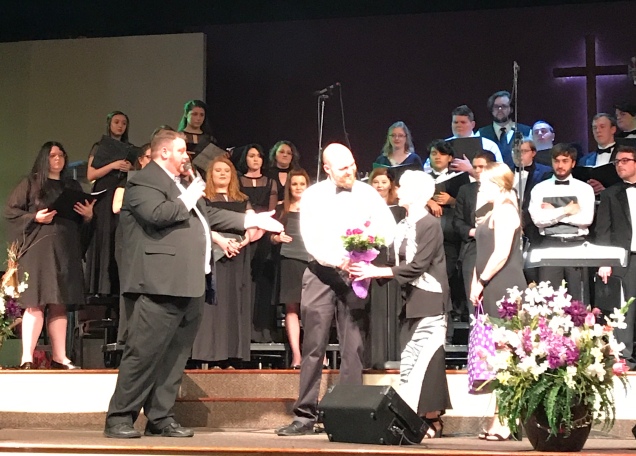 There was a special presentation at the mid-point of the show for Peg Brasfield Welch, a teacher who has impacted so many people. To begin, Nathan Rhea stated that she changed his life 18 years ago. Peg told him that “singing is a gift from God.” Nathan recalled how Peg encouraged students to keep singing and to keep choral music ‘alive.’  The goal is not to compete with each other, but “to shine together.” 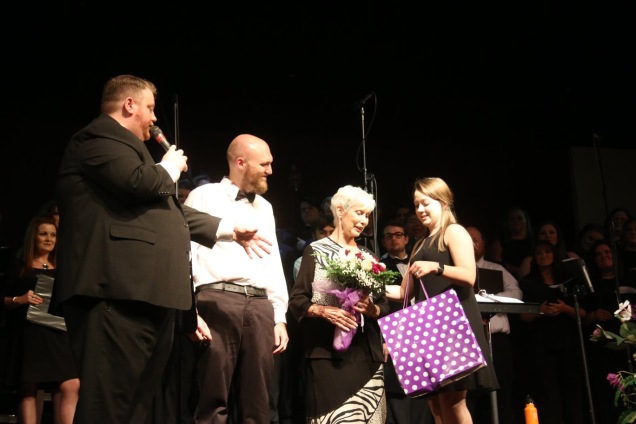 It is rare when a former student gets the opportunity to honor a teacher in a special collaboration such as the Celebration Concert. Nathan Rhea said, “I am so honored to have had the chance to direct this concert and plan it with my former high school choir teacher. How often does that happen? A student co-direct with their former teacher…how cool is that?”  (Photo courtesy of Kraehmer Photography.) 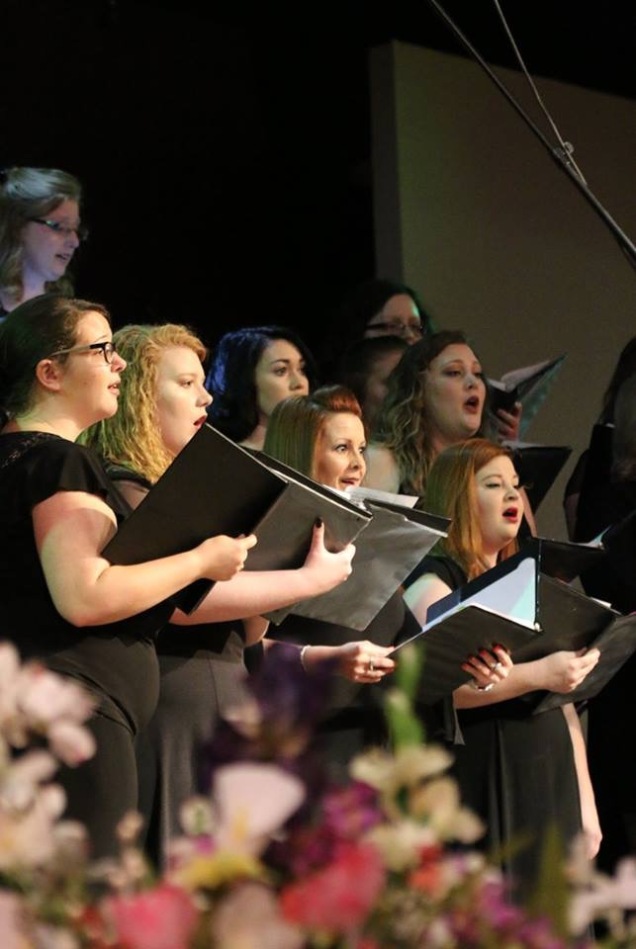 There was more music to come—and it was lovely. (Photo courtesy of Kraehmer Photography.)

Anita Ownby Lipton sings a solo from “Order My Steps.” Anita always remembers Peg’s quote, “Music is all around us. All you have to do is listen!” 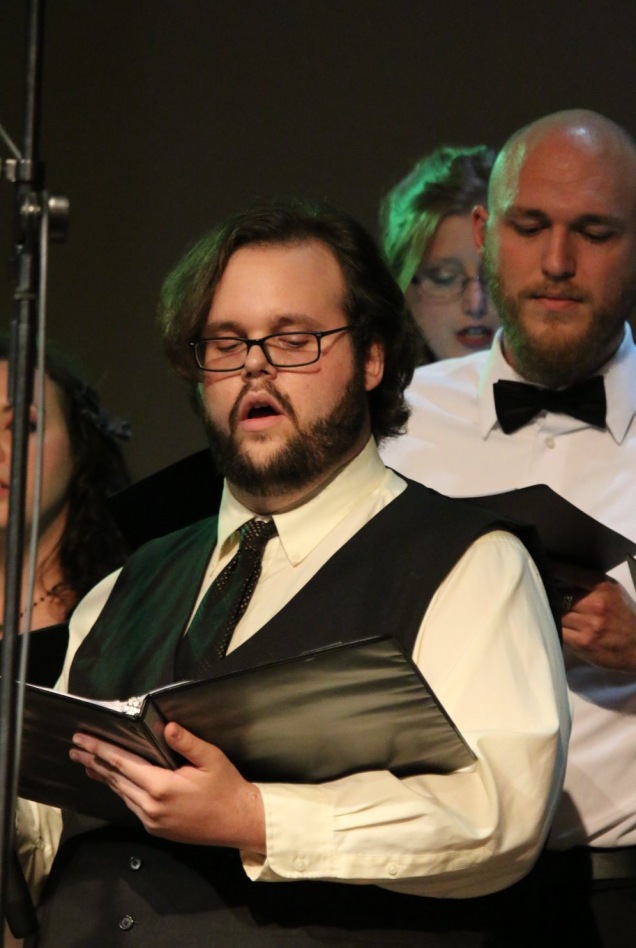 Drew Hatcher’s voice almost brought Melinda and I to tears during “Nella Fantasia.”  What a beautiful sound!  (Photo courtesy of Kraehmer Photography.)

Some of the best singers to come from the SCHS Concert Choir were present during this Celebration Concert. (Photo courtesy of Kraehmer Photography.)

After the performance, Mr. Roach chatted with two of Peg’s sons. 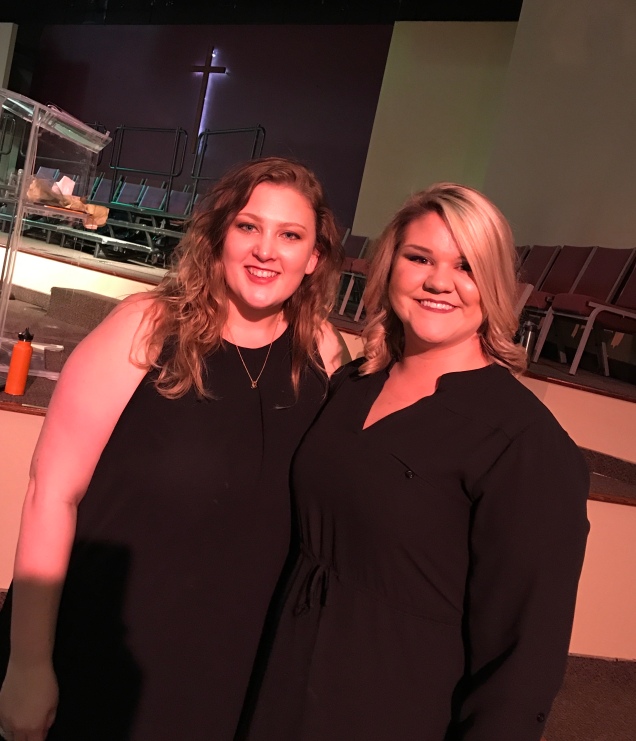 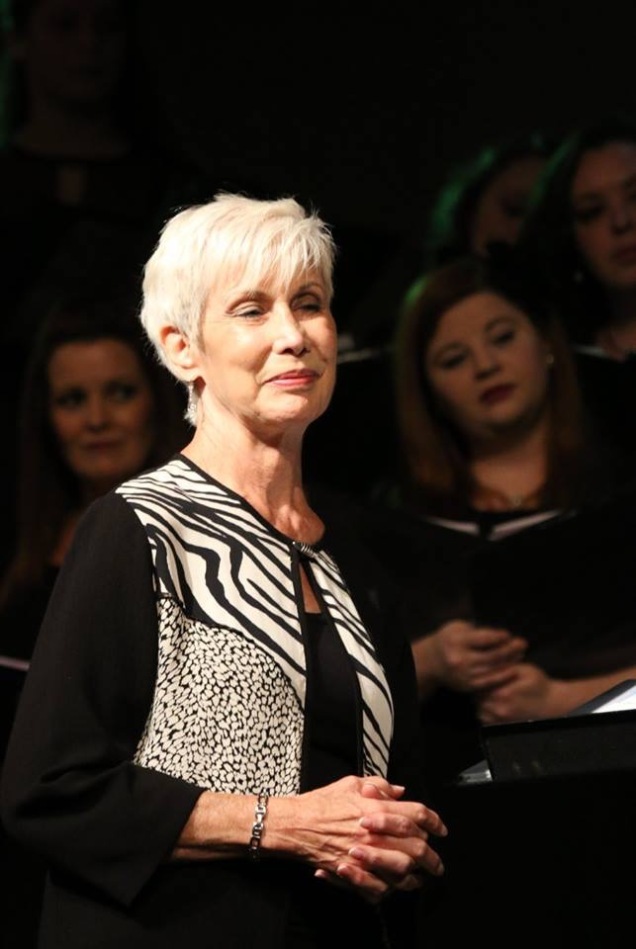 Nathan Rhea, choir director at SCHS had a final thought about the Celebration Concert.  He said, “Peg inspired me so much and that is what I want to do for my students: to inspire them to be better than they ever thought they could be. The SCHS Choral Department is what it is today because of Peg and it was nice to have a chance to give something back to her. Her former students showed up, sang and then everyone praised what she had achieved. This is everything to her.”

After the show, Peg reflected, “The students bonded as a group, made up of separate classes and all ages. Nathan Rhea outdid himself collecting the data and the history of this organization. This celebration was on my bucket list. It was everything, and more, than I hoped for.”

At the end, we left the Celebration Concert with this thought…

“Singing is something we can do our whole life long.” Peg Brasfield Welch.

5 thoughts on “An Epic Reunion: SCHS Choir Celebration Concert, May 2018”