Despite a threat of rain, I went downtown to see the last weekend of History and Haunts in downtown Sevierville. What a nice event! This was a special event that took place every Saturday in October. Each Saturday offered unique activities and fun. I was particularly looking forward to the last Saturday in October due to the Haunted History walking tour, led by Sevier County Historian Carroll McMahan—and it was amazing.

There were a couple of food vendors parked in front of the courthouse. This one is becoming quite popular. 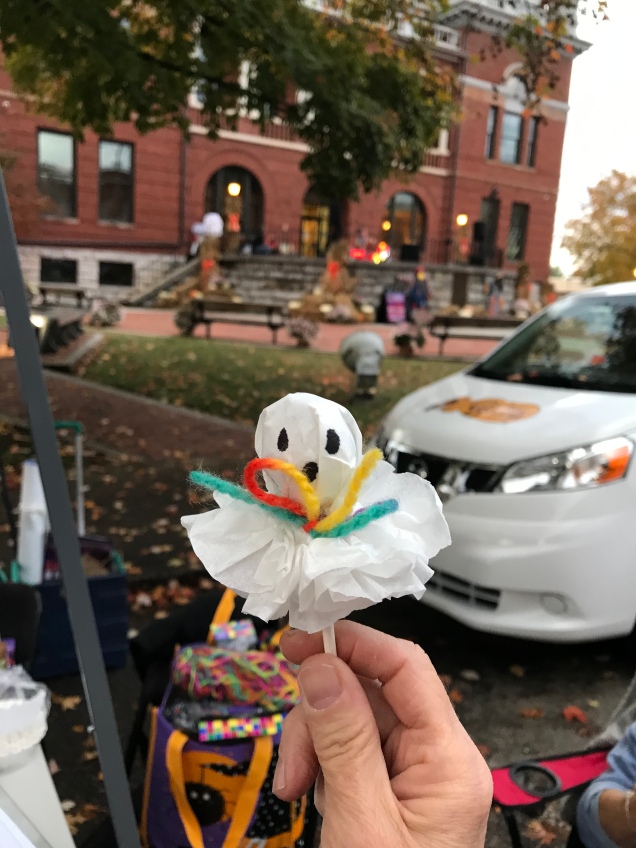 The Sevierville Commons Arts Council never disappoints with their ‘make-it-and-take-it’ art. I got a little souvenir of the season. How cute!

The Sevierville Commons Art Council had an amazing assortment of fall crafts for all ages. I especially enjoyed the pumpkin painting and the homemade masks. In the photo above, Crystal is helping me cut a mask to resemble a cat for my work outfit tomorrow. Thank you!

Fall was in full force downtown.

Music on the courthouse steps created a festive atmosphere. You could actually get a seat because a huge crowd was on the first Haunted History walking tour at 6:00. I was hoping to do the 7:30 tour to enjoy it after dark.

Downtown is lovely right now so go see it if you get a chance.

It was dark and approaching the time for the 7:30 Haunted History walking tour. It was full of tales about past Sevier County citizens, many who met a tragic end. The actors above were members of the Seymour High School Drama and Forensics group. They were excellent!

I checked the radar on my iPhone (as my friends and colleagues know that I do) and saw that showers and thunderstorms were nearby. Because the threat of bad weather, the 7:30 walking history tour took place in front of the courthouse. It was a good call. 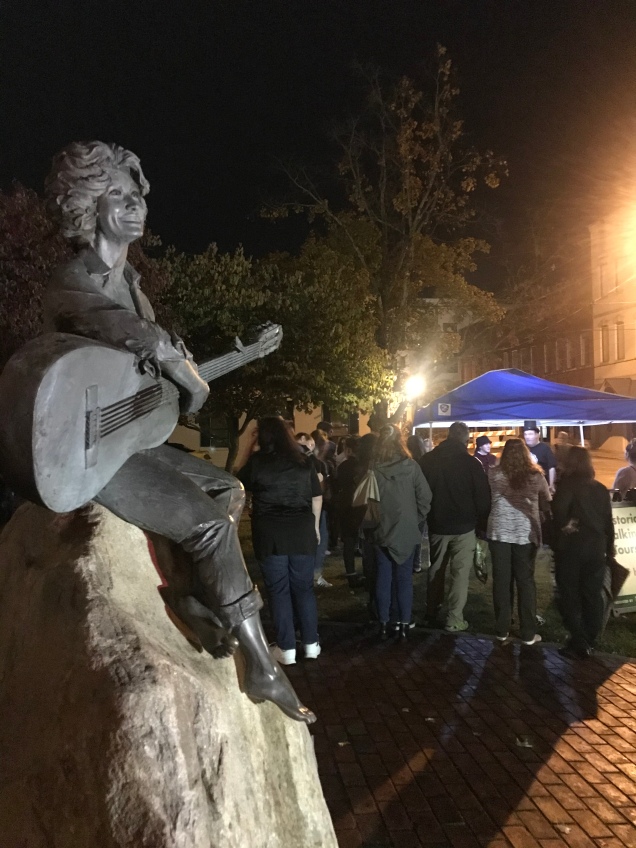 Dolly seemed to be listening to the tales along with us. 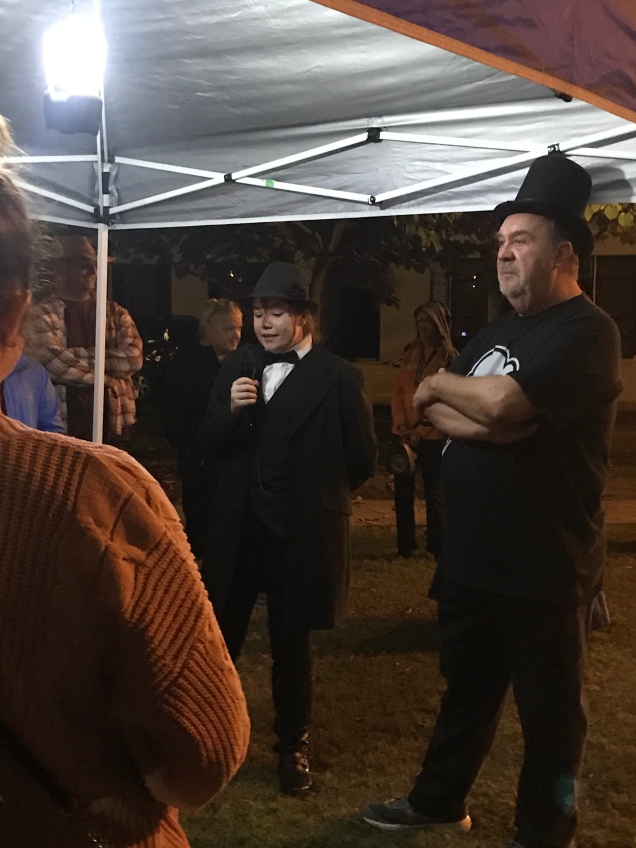 The students were assigned a person in Sevier County history and given a brief background about the person, but it was the students’ responsibility to create lines and to retell the story in the ‘first person.’ They did a great job! Caroll McMahan, Sevier County Historian, led the tours and introduced the former Sevier County residents.

“Former residents’ summarized their lives…and their untimely ends. I really enjoyed the improvisation and the interaction between the actors and Carroll McMahan, our county historian. 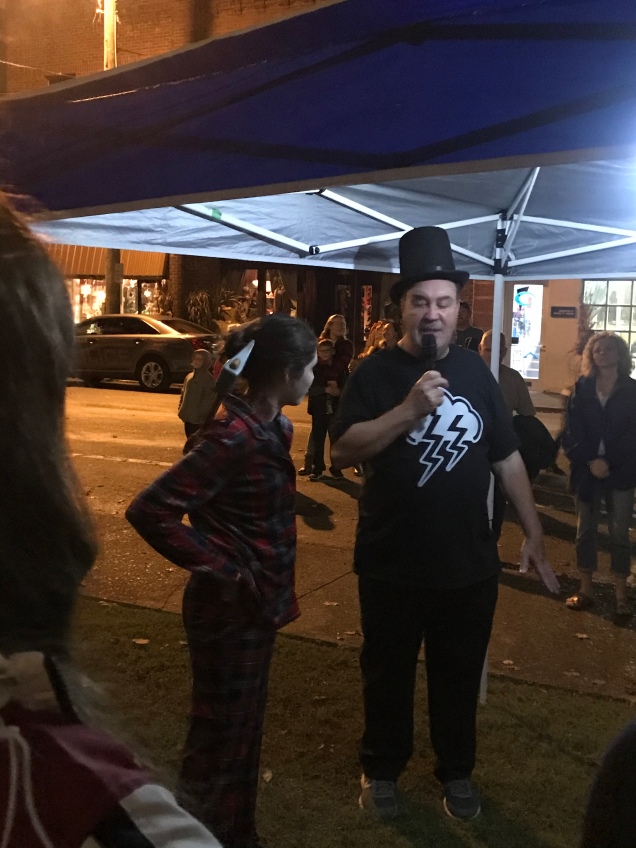 This unfortunate character ended up with an axe in the head.  (The actor said that you can find and axe like this one on Amazon!) 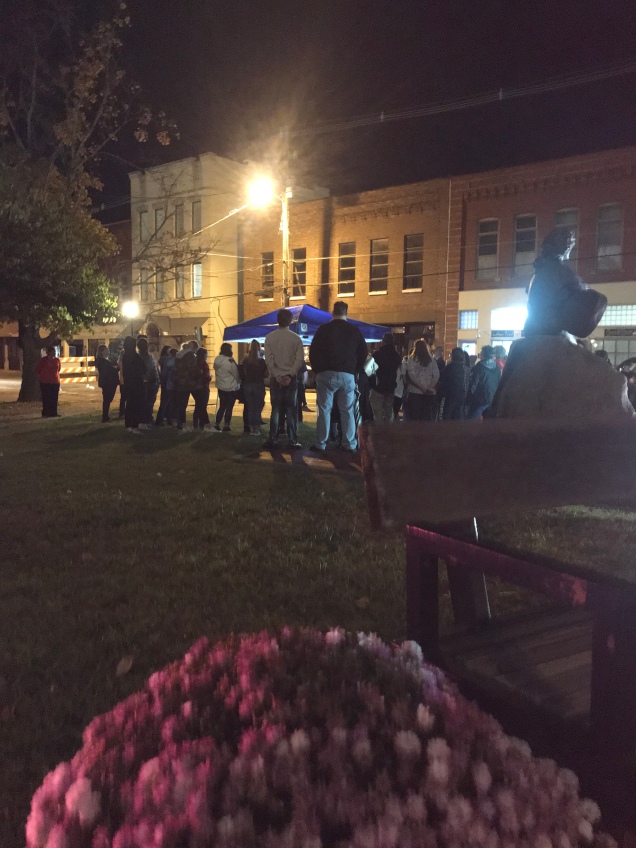 Each character told their story quite cheerfully. The students skillfully performed their lines and roles. Bravo!

At the end, choir members from Northview Academy sang a somber song to close the event. I wish that I could remember the name of the song because it was so pretty.

Because storms were headed our way, I decided to skip the storytellers and to save that for next time. In conclusion, it was such a nice event! I had heard of it before and had always wanted to do it, particularly the Haunted History walking tour with actors. I was so glad that I had the opportunity to experience History and Haunts during October and recommend it for you next year. It was such a nice evening.

See you out and about in Sevierville…

I arrived about 5:45 to see the first weekend of History and Haunts in downtown Sevierville. Although it took place at the same time as a Vols home game and the Tino Homecoming, there were quite a few people enjoying the event. And what a nice evening it was!  Here are some pictures from my visit and the Walking History tour that highlighted famous African American brick masons in Sevierville.

I parked behind Sevier County Bank (my bank) and walked to the back of the gazebo area for the History and Haunts event. Henderson’s Produce was at their usual spot and had some beautiful pumpkins for sale. (I ended up buying several bags of produce on my way out so the bank was a good parking choice.)

Always glad to see Courthouse Donuts and all their treats. There is no better downtown supporter than this business! 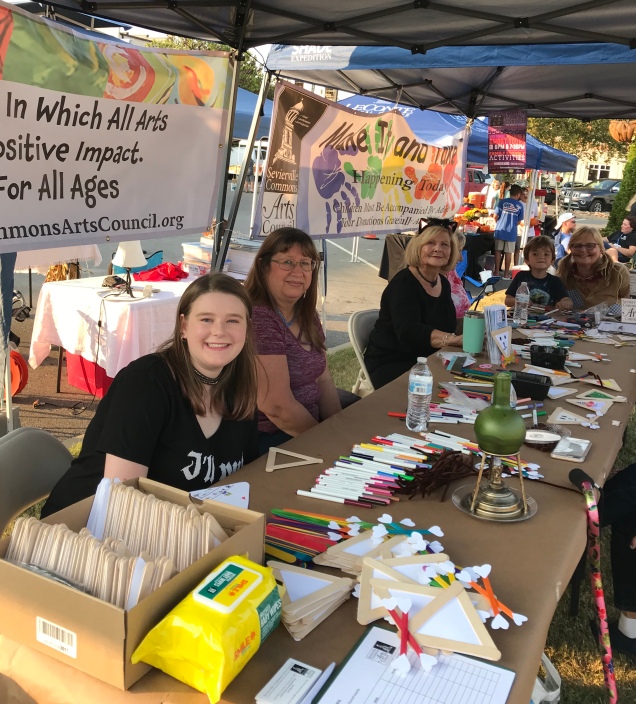 Next, I found the Sevierville Commons Arts Council table with the ‘make-it-and-take-it’ craft. So fun! Kids of all ages will enjoy the Arts Council crafts.

The only limit is your imagination!

I made it in time for the 6:00 Historic Walking Tour of downtown Sevierville, led by Carroll McMahan. The tour would focus on Sevierville citizens who were African American brick masons. Their bricks built most of downtown! 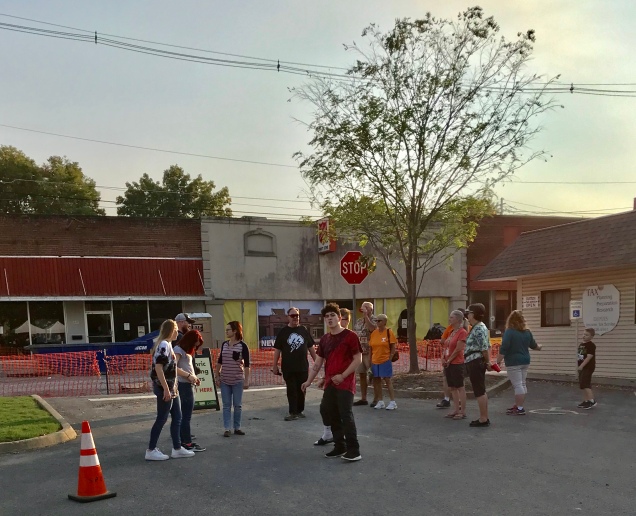 It was easy to find the tour. Just walk up and enjoy!

We walked up Court Avenue to hear Carroll McMahan tell us about buildings formed by local brick masons and to hear about some local history. We heard names like Isaac Dockery, Tom McMahan, and Stuart Burden. One of the people taking in the tour was also a descendant of Isaac Dockery. It was fascinating.

You can see so many brick buildings downtown and most were built by local African American brick masons. They had their own kilns so they could make the bricks on their properties off Allensville Road and Middle Creek Road. 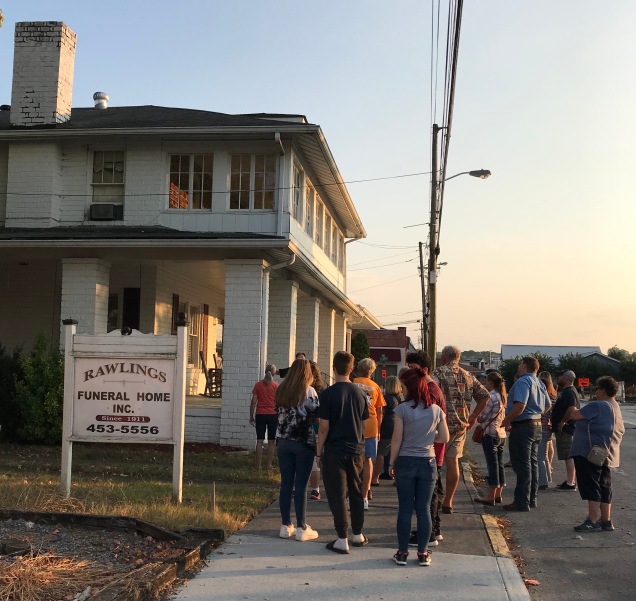 We wandered by more houses with historic significance. This building was originally a hotel that served early visitors to the Great Smoky Mountains National Park.

We walked by this building. It has changed ownership since I was here a while ago. 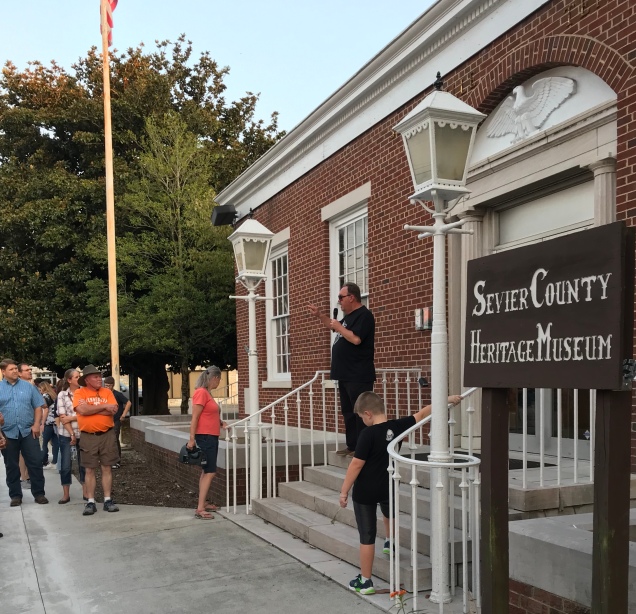 The old Sevierville Post Office was a stop on the tour. When I moved to Sevierville, it was still open!

At the end of the tour, I wandered around the gazebo area before the sunset. However, I imagine it will be nice after that because the event was open until 9:00.

This business will be relocating soon downtown. I cannot wait!

Next, I wandered over to see some of my favorite vendors. This is my favorite soap artist. She has some lovely things for the fall season. I hope she is back next week!

There were some other new vendors at the event downtown.

Several games were located by the gazebo. Come and play Jenga or Cornhole! 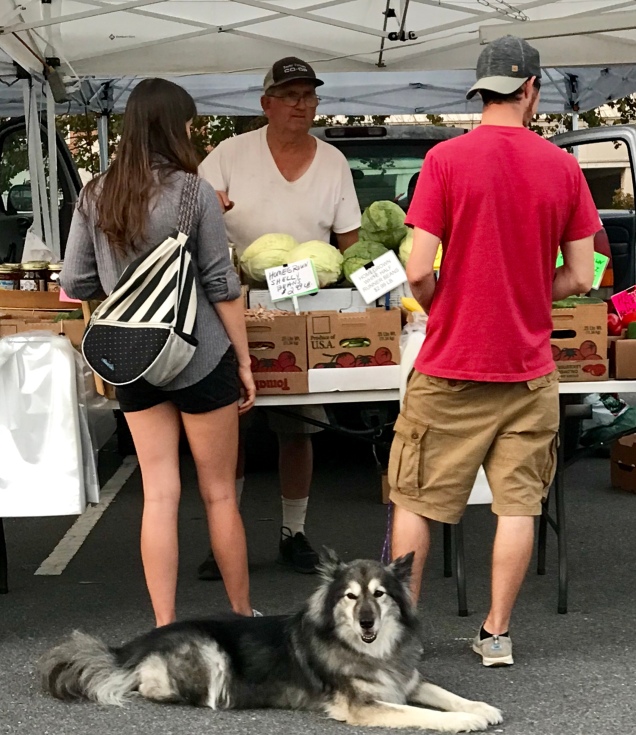 It is a great family event. Four legged family members on a leash are welcome too. 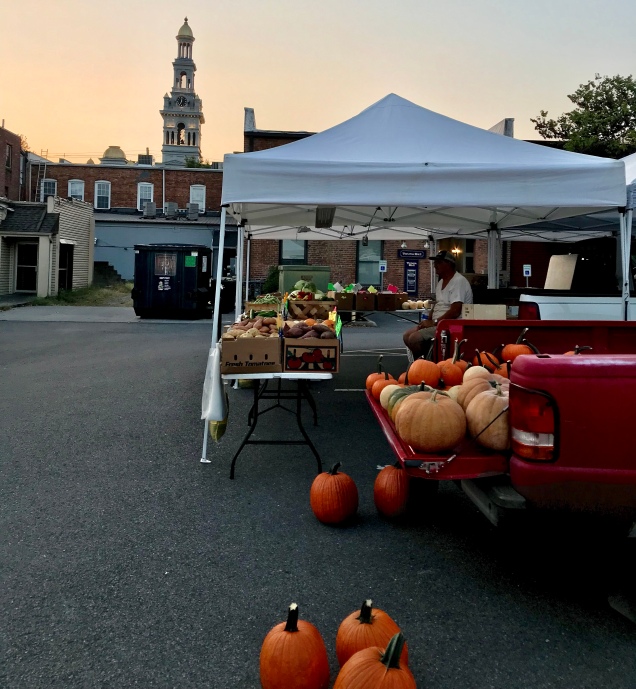 The sun sets on the courthouse with pumpkins ready to be taken home.

History and Haunts will take place every Saturday in October. Go to www.downtownhistoryandhaunts.com to see more.

Next week, there will be music, games, fall crafts, storytellers, a downtown walking tour, and a Howl-O-Ween Dog Costume Contest. Registration at 6:45 and the contest will take place at 7:00. Bring your fur baby!

October 26 will be amazing! Live music, games, fall crafts, and food will accompany the main event: Haunted History walking tours. Sevierville Historian, Carroll McMahan, will lead a Sevierville Walking History tour that will feature actors from Seymour High School’s Drama Club that will bring the past back to life. Tours will take place at 6:00 p.m. and 7:30p.m. I’ll be there for the later one to enjoy the tour after sunset. There is sure to be some seasonal ambiance.

Lots of fun activities will be happening downtown Sevierville on Saturdays in October. Scare up a friend or two and come on down. See you out and about in Sevierville.