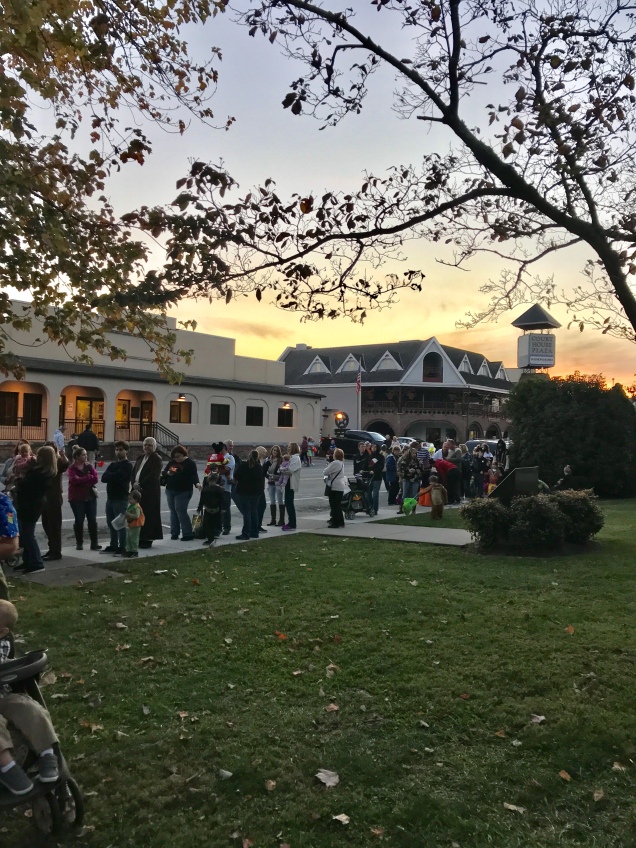 Last night was the biggest event that I have ever attended in downtown Sevierville—and the best. I really didn’t really know what to expect from the Sevier County Sheriff’s ‘Spooktacular’ event at the Courthouse, but I quickly saw that it was a great gathering for families. The first thing that I noticed was a line that wrapped around the courthouse. The photo above shows the first line that I noticed as it wrapped around the building.

Our friends at Courthouse Donuts had a free cinnamon doughnut for all children attending the Spooktacular event. They smelled divine! 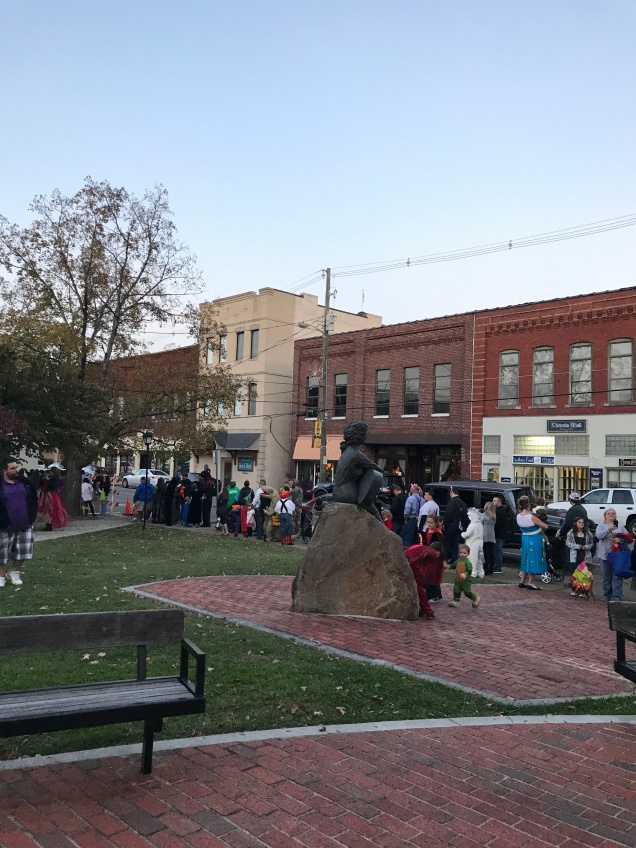 I wasn’t kidding about the line wrapping around the block. Amazing!

This T-Rex graciously posed for a picture. 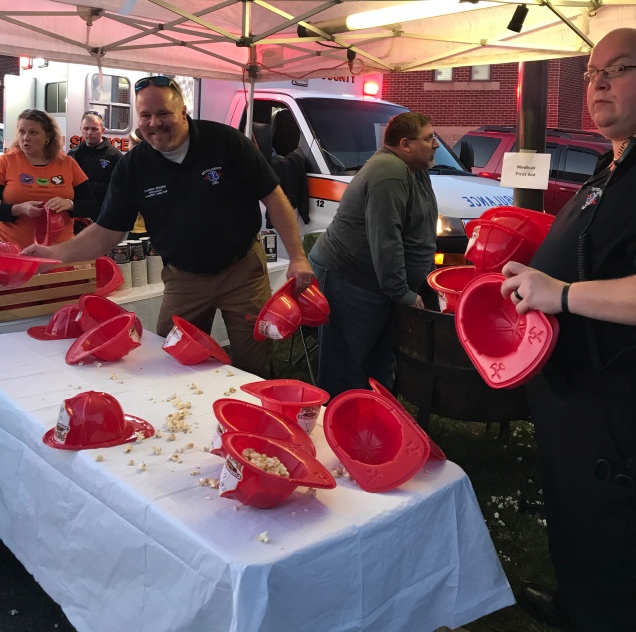 These firemen were serving popcorn in plastic firemen hats—a double bonus for kids! They gave me some and it was, without a doubt, the best kettle corn that I have ever had anywhere. 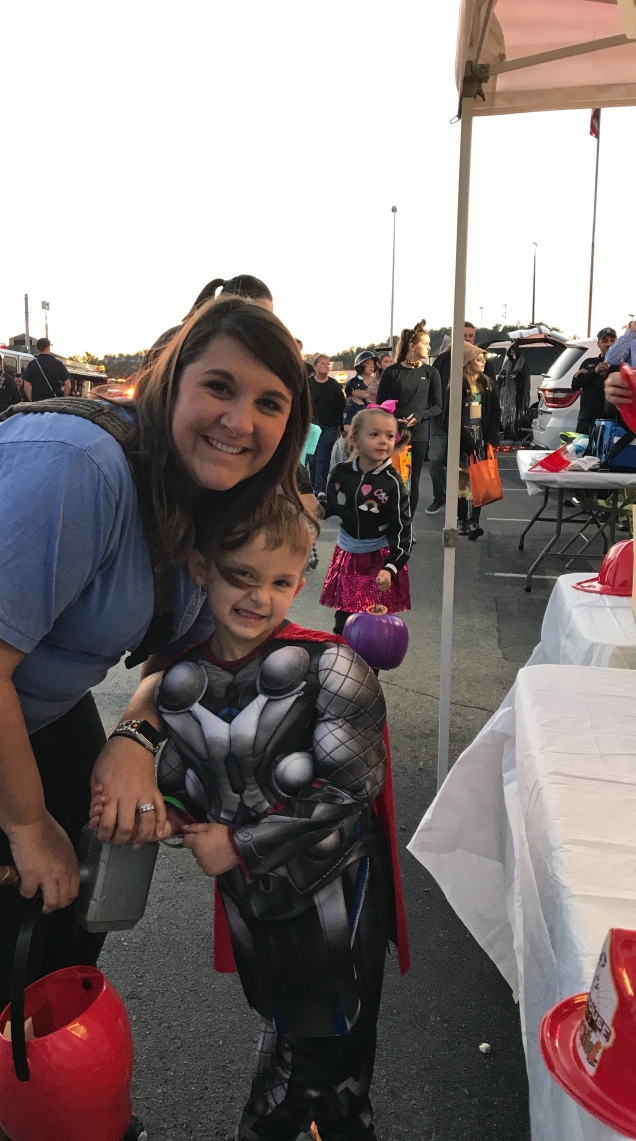 I ran into my friend Ashley and her superhero at the kettle corn table. They were having such fun!

I liked the little policeman in this picture talking to the real ones. However, after looking at this photo a minute, there is something in the background that is amusing in this shot.

Our friends from Pets Without Parents attend the event with Rocko. Drop by PWP on Chapman Highway and say hello to Rocko and other pets some time.

Friendly ladies from the Sevier County Sheriff’s Office having a great time and greeting young trick or treaters. 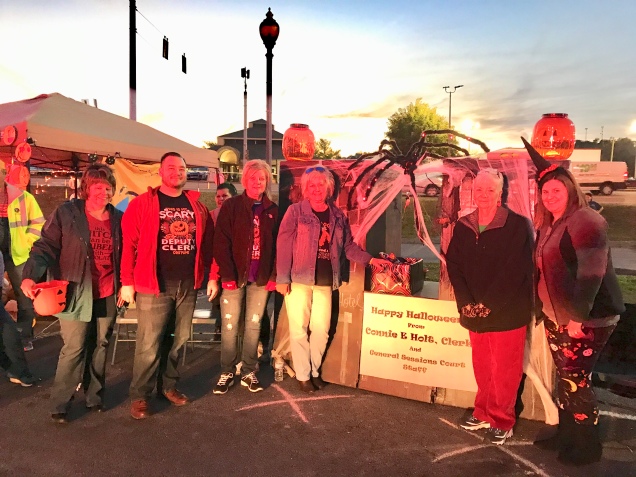 I was impressed with the attendance of public servants of all kinds at the event, like Connie Holt in this photo. In the following photos, the sun is setting quickly and my flash was trying to keep up. I apologize for the strange colors.

Fun to meet firemen and Sparky.

A funny story here… I asked ‘Sparky’ if I could take a picture and then went on my way. A young man came up to me and told me that Sparky was actually a former student of mine so I ran back and said hello. Good to see Jason after all these years!

Great costumes and tower of treats! 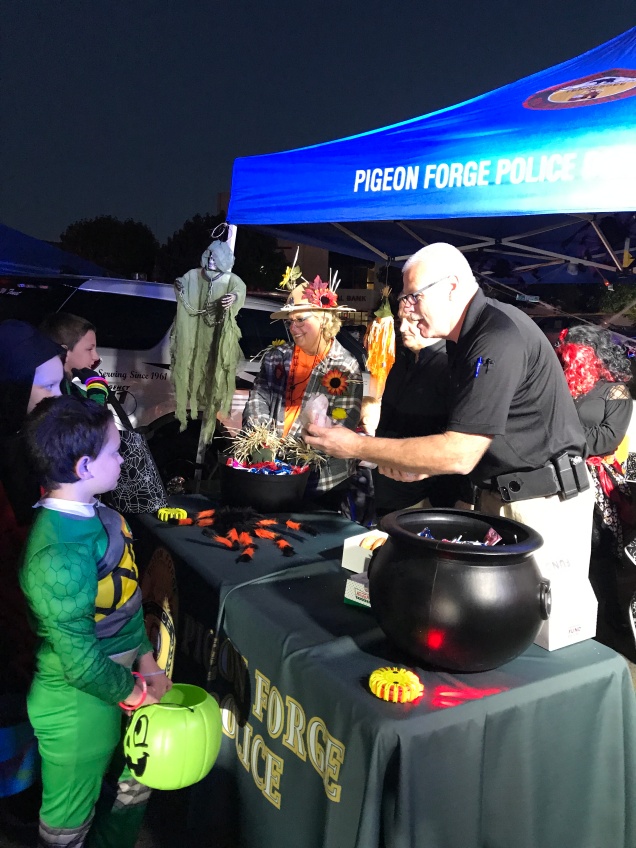 The Pigeon Forge Police Department showed me great hospitality and a hot doughnut. Great decorations too! 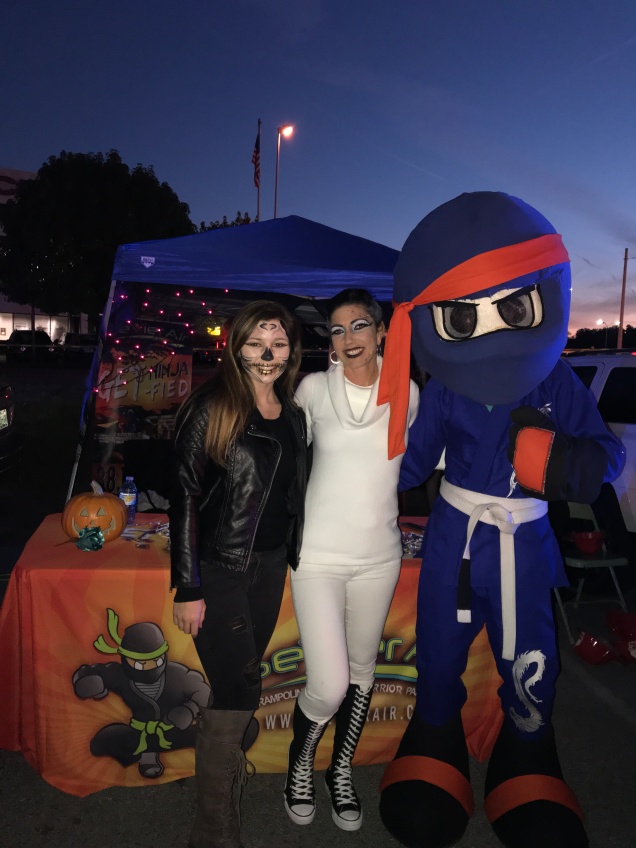 Sevier Air and a Ninja manning a trick or treat stop at the Spooktacular. 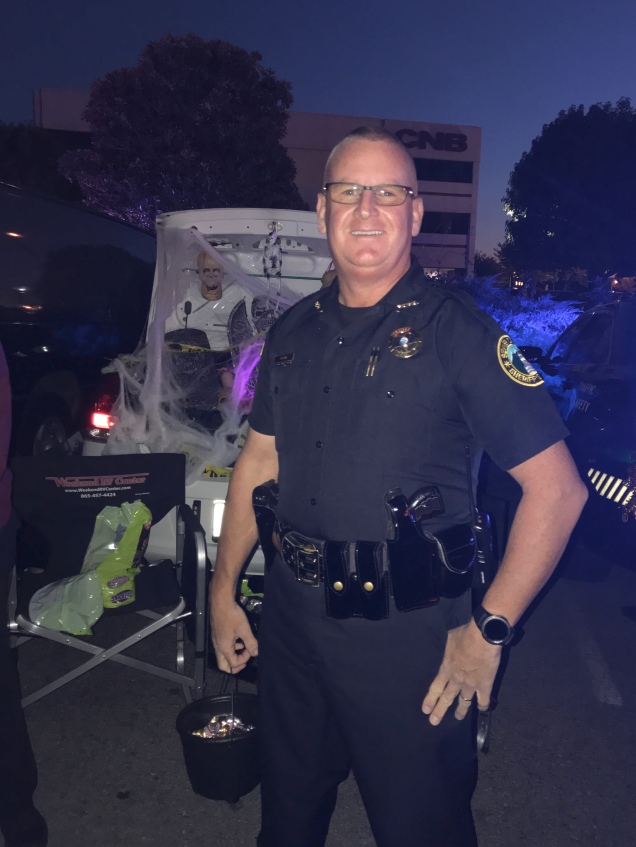 It was good to see our SRO from last year, Officer Conrad. He really needs to clean up his squad car though! 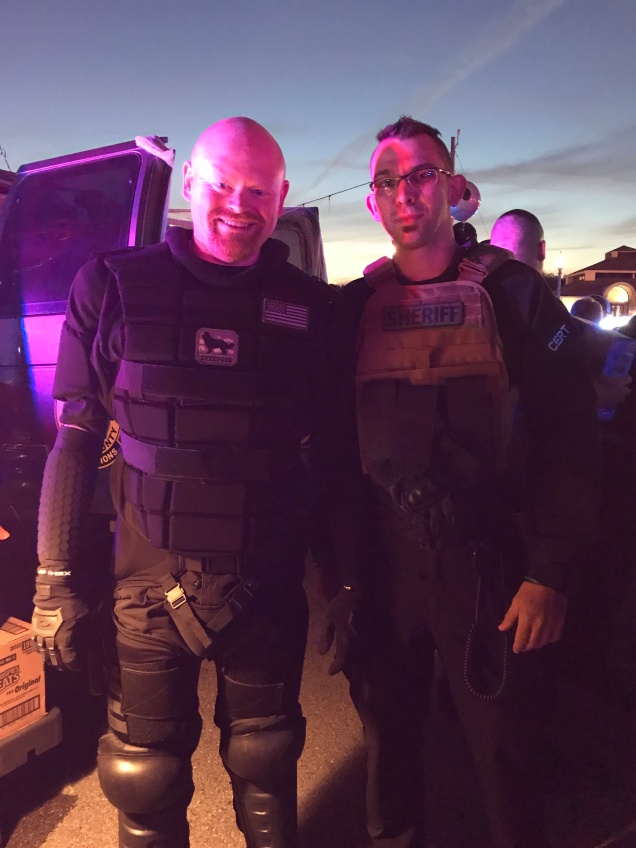 Another former student who works for the Sheriff’s Office. I don’t think that is a Batman uniform though. That is the real deal.

Finally, Stacy Cutshaw’s son wins my vote for the best Halloween costume of the year. This electric chair was so real looking and amazing that I couldn’t stop looking at it. The child was just walking around with it, but it looked like he was sitting in real electric chair. Stacy said that they just used materials around the house and made it themselves. You win! The best costume of 2017!

The moon was rising over the courthouse as I headed home, but today I heard someone say that there was still a big crowd about 10:00 in the evening. Amazing attendance. There must have been thousands there.

I saw families relaxing and enjoying the evening because they knew that they were in a safe place, with safe treats, and safe activities. It had a great vibe and I enjoyed being there. The great efforts of Sevier County first responders and others made it a night to remember. What a great way to get out and about in Sevierville on October 31st.

See you there next Halloween!